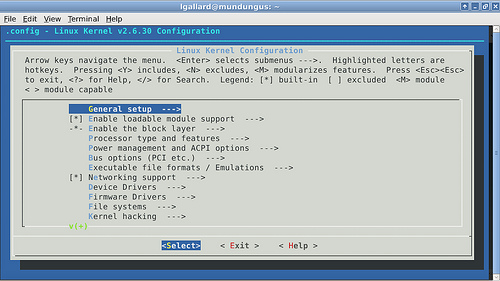 There are several reasons for compiling a kernel. For instance you might be interested in adding support for a new hardware or functionality, or for tuning your system in order to have a reliable service or application. Whatever your reason is, here you are the directions to compile a kernel the old-fashioned way.

Due to you are about to compile a kernel, you’ll need some files and compilers. You will also need ncurses to display dialog on a consoles. In Debian you can install all this by typing:

You’ll need to get the kernel’s sources to compile them. They can be got from your distro’s repositories or from kernel.org directly. In Debian by installing the following package you will get a tar file in the /usr/src/ directory:

If the linux link exists from previous compilations, remove it:

Now make a link to the unzipped directory. If you downloaded the sources from Debian it would be:

If you downloaded from kernel.org, you have to type:

Go the the linux directory:

If you’ve compiled other kernels it’s a good idea to clean up everything before starting to compile your new kernel:

Now proceed to set your kernel’s options. To do so, you can use make config (an interactive but annoying interface), make menuconfig (based on ncurses) or make xconfig (you’ll need X running).. I suggest to use the second option:

You will see a window like the one shown above (main post image). There you can choose new features for your kernel, and tell it to compile them as a module or inside the kernel itself. After you have made your selection, choose Exit to write the .config file

At this point you have already set your kernel, in order to compile it type the following:

This step can last a while according to what you’ve chosen. Once it has finished (and if there weren’t errors) proceed to install the compiled image and its modules:

You have to make a pre-image, know as initramfs, to help out your kernel to load at boot time. To make that pre-image for your kernel, type the following:

Now edit grub (or whatever bootlaoder you are using) , to boot your compiled kernel. You can do it manually, or if you are in Debian the update-grub command can do it for you automatically:

Finally, reboot your computer and choose you new compiled kernel!!

One of the most useful tools when managing a 3D printer is OctoPrint, since among several things it allows you to manage your printer from a web interface, ...

I’ve been using my iPad for a while to take notes with the Apple Pencil and I decided to write this article to tell you about a product that has pleasantly ...

It’s been a while since I posted on the blog, first because I couldn’t find something interesting to share and second because there wasn’t much spare time (...

In Helm 3 the support of helm serve command was removed due to some design issues, therefore if you need a similar tool you have to install helm servecm p...