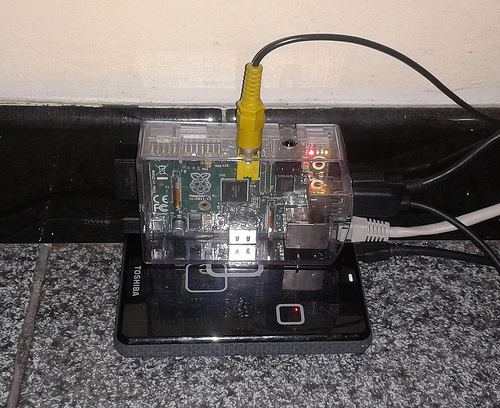 I’ve been using my Raspberry Pi with a 4 GB - class 4  SD card Kingston until it decided to die (since I burn the image the first time that SD card was a little problematic). Because I didn’t have another 2GB or higher SD card, I decided to do a research to check if I could use the first partition as boot and another partition from an external USB hard drive of 320 GB. Effectively it can be done and I describe the needed steps on this article.

I decided to use the Raspbian image Raspbian 2013-02-09-wheezy-raspbian.img, but first I had to do a trick: dump the image to a 8 GB pen drive to be able separate the /boot partition and the remaining file system.

Dumping Raspbian to the pen drive

Just dump the Raspbian image as it were a SD card, but instead of using /dev/mmcblk0 do it on your  pen drive:

In order to extract the Raspbian’s boot image just dump the first partition of the pen drive:

Do the same to extract the file system where the operating systems resides:

You will still need a SD card to boot your Rasberry, but it not longer need to be 2GB, in fact it could be much less, even 64 MB (I use a 1 GB SD card I found). To do so, you need to make a partition with GParted of about 60 MB as show in the next picture: 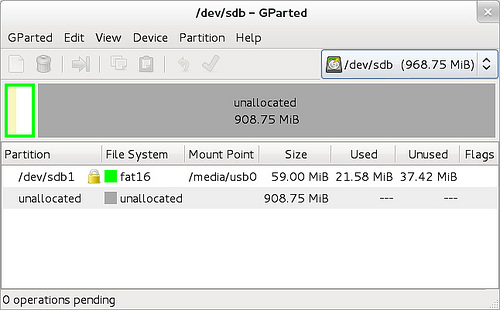 Now copy the content of the first image you dumped previously:

Once you have copied the data you must mount that partition and then edit file /media/usb0/cmdline.txt  (change /media/usb0 according to the mounting point), and put the following:

Here is important to put root=/dev/sda1  so the Raspberry uses the first partition of the external USB hard drive as the root partition, I mean, the “/”; directory at boot.

Connect the hard drive to a PC and make the partitions as shown in the next picture. The first partition will content the file system  and the second one will be used for saving data (you can define later that in the /etc/fstab of your the RaspBerry Pi).

Now you can dump the Raspian image you got to the first partition of the USB hard drive. To do so type this:

After that check the available space. It should report something like this:

If you follow these steps, your Raspberry Pi will boot from a USB hard drive.