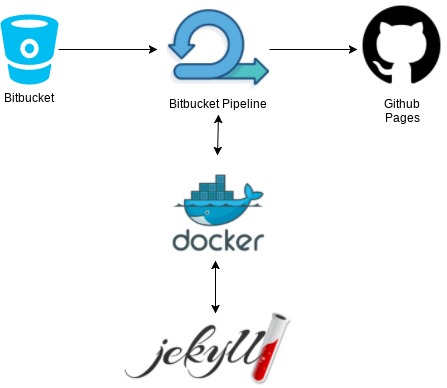 I had some security issues with WordPress so I decided to changed my blog to something static and served from GitHub Pages. But the new site had to meet some minimum requirements:

I had heard about this solution so I had it as a reference, like Hugo, but I saw it’s supported by GitHub Pages therefore I decided to give it a try.

From WordPress to Jekyll

To recover the already published posts I set an isolated Docker environment using a database dump of the site and the latest WordPress version with the needed plugins to made it work.

Then to export all posts I used the WordPress to Jekyll Exporter plugin.

To use this plugin I had to disable the qTranslate plugin, which was outdated and without support. Anyway I needed to migrate it to another solution, but with this change it was not the case anymore.

I tried some options but the Minimal Mistakes theme suit better to what I was looking for regarding looking and functionality.

For this I also tried a couple of plugins, but the one that worked better was jekyll-multiple-languages-plugin.

GitHub Pages supports a really limited number of plugins, therefore if you need to use any custom plugin you must generate the site’s static files using Jekyll and then push them to GitHub. This way you can use any plugin regardless GitHub Pages’s support.

Automating the generation and publishing of the static files

There are several examples of how to automate the building and publishing of the static files, as described in the polyglot plugin wiki page:

I came up with with the idea of using Bitbucket’s Pipeline to automate the publishing, so I did a research and found this very explained article Continuous Deployment for Jekyll using Bitbucket Pipeline to deploy in Github, which you can check to see the details steps.

Almost everything I did was based on the two former articles, but it was not straightforward, I had to adapt the script because I couldn’t push to my GitHub personal account’s gh-pages branch, so I defined my Pipeline this way:

Where $githubtoken is a environment variable passed to the container, which has the token previously generated at GitHub.

Building the site on my local machine had no issues, but building it in the Pipeline brought this error:

Because it was an encoding issue I supposed there was something different in the Pipeline and my PC. I thought the Ruby Pipeline is just a Docker image of Ruby, then I checked the image’s documentation and it turns out that it can be fixed by setting the encoding via an environment variable in Settings > Pipelines > Environment variables:

Now just by pushing the posts to the Bitbucket repo it runs the Pipeline and it publishes everything on GitHub Pages!