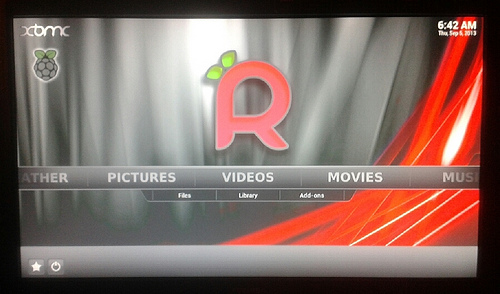 A friend recommended me this distro for running XBMC which was released by one of the developers of the XBMC project with specific optimizations to run on the Rasberry’s hardware. So I decided to test it and I explain here all have to do to install it, that indeed was a little problematic but successfully at the end. 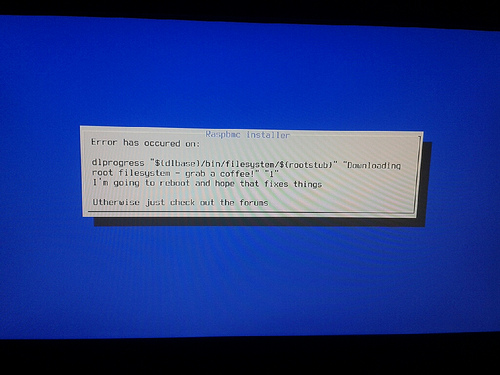 The project’s page recommends to use the installer or Network Image, a python script which practically do the whole installing process, partitioning and doing the initial setup…or at least it tried to, because in my case it didn’t work due to my network connection at home didn’t help at all so I couldn’t download the image using the installer. Therefore I had to install the complete image of Raspbmc.

The complete image of Raspbmc

There’s another option offered on the project’s page which is to download the  whole image of Raspbmc of 235 MB called Standalone Image, but after extract it it sizes 1.4 GB roughly. This was an issue because my SD card’s capacity is  1 GB and I didn’t buy another one as I have a 320 GB hard drive just for the Rasberry Pi. Therefore I came up that I could shrink the image to fix my 1 GB SD card.

If you check it with gparted you should see something like this: 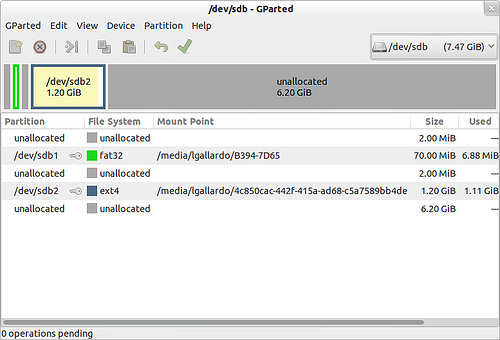 Later using  gparted itself I had to resize the partition /dev/sdb2 to 800 MB roughly, so I could put the /boot de 74 MB as well in my 1 GB SD card. 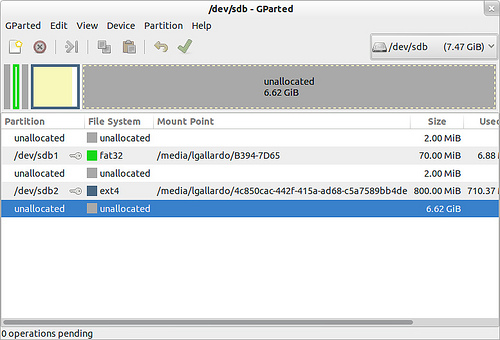 To extract the /boot partition from the pen drive you can do this:

In a similar way extract the file system of 800 MB on the another partition:

The initial setting it’s done by the installer, which is an script that ask some questions as networking parameters and such. Those values can be modifies later on XBMC with an script added for the Raspbmc: 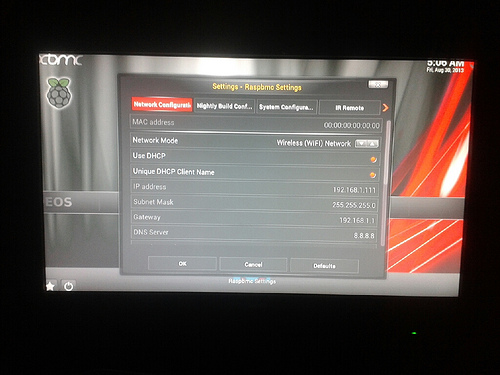 The installation detected the hard drive automatically but it didn’t let me partition it, in fact it erases everything and creates a unique partition which is mounted into /media withe the partition’s UUID . But I wanted three partitions: one for the operating system (/), other for the memory swapping  (swap) and the remaining space for data (/media/Toshiba320), and the /boot partition which must be in the SD card.

To partion the hard drive I deleted and created the partitions using fdisk. At the end the disk was distributed in this way: 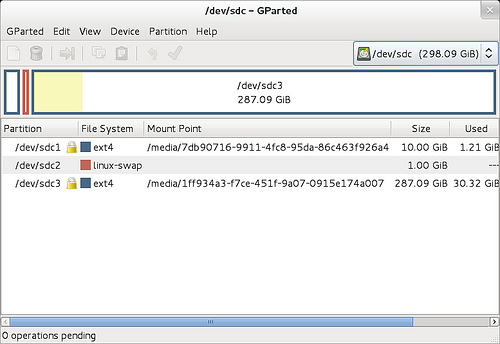 Then I edited the /etc/fstab to reflect the changes:

And later I edited the file /boot/cmdline.txt to indicate that the operating system will be read from the hard drive instead of the SD card:

To disable the firewall that comes with a DROP rule by default on the Raspbmc, you have to edit the file /etc/network/if-up.d/secure-rmc, where you have to comment the following line:

You also can disable the firewall form the setting script of XBMC as show next: 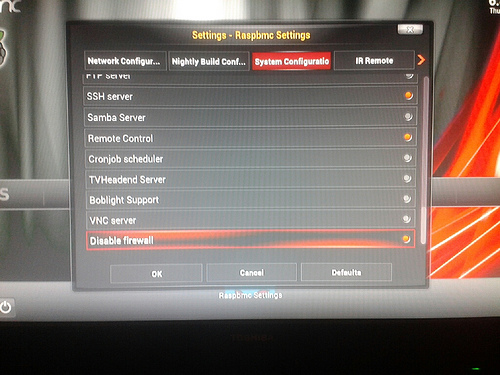 I have a keyboard and a mouse connected to the Rasberry Pi but this is not practical, the ideal scenario is to have a remote. As the Rasberry Pi is connected to the WiFI the idea is to use this network  instead of IR or Bluetooh. Therefore I thought in an Android application and mi first choice was XBMC Remote  but it seems it has some communication issues that makes XBMC goes crazy ( The Raspbmc version and other for Raspbian behaves the same), but at the end I used another application called Yatse which works properly and it looks better as you can see in the next screenshots I took from my phone: 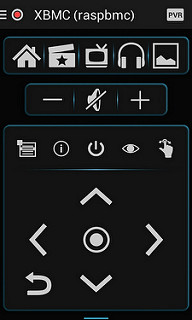 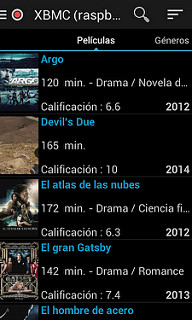 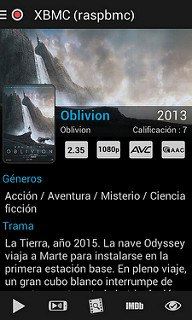 Comparing XBMC I had tried before on the Rasberry Pi, this version really runs well. It plays movies in several formats (.avi, .mkv, .mp4, etc) smoothly. On the other hand it has Linux inside so it’s my download center with qbittorrent-nox, and I use it for other testing purposes. And this is what XBMC reports as resources consumption: 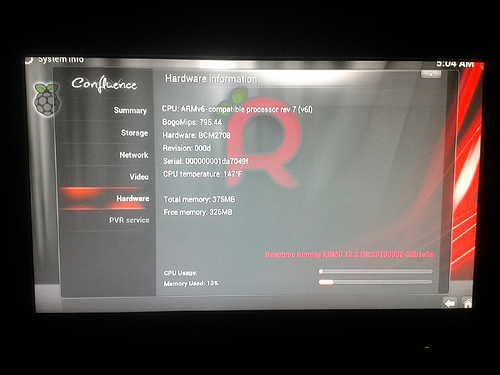 I just published a Terraform module called terraform-aws-codebuild at Github, so I decided to share it as well in the public Terraform Registry.

I wrote this module to be able to create AWS Route53 Resolver rules for outbound endpoints in a more convenient way.

I share here another Terraform module that I just published as open source, which allows you to create Amazon Cognito User Pools with its attributes and re...